Need a unique Christmas gift for the craft beer lovers in your life?  Learn how to make a DYI Craft Beer Advent Calendar and give them a beer once a day for 25 days!

Happy Thirsty Thursday, my friends!  If you are a craft beer lover, you are probably wishing someone gave you this big ass box of beer this morning before you went to work.

Well, that was my hubby this AM when I gave him this beer advent calendar.

I can tell you he was pretty darn psyched to get it (isn't a homemade Christmas gift the best!)

What is An Advent Calendar?

The idea of an advent calendar is to open one gift a day from December 1st to December 25th (aka Christmas) and each gift is numbered by the day.

I really wanted to get this post out earlier, but J reads all my posts, so I didn't want to publish it before giving him the present!

Unfortunately, I also waited until the last minute to do this project and was a little rushed.

It didn't turn out quite as creative or pretty as I would have liked it.

Have no fear, next time I'll do a mac daddy one.

J favorite beers are IPAs so most of this present is made up of those.

He recently became a fan of sours so I threw in about 3 or 4 of those bottles.

I've included a list of all the beers included in J's advent calendar below for inspiration.

This beer advent calendar isn't just for Christmas!  It would also be ideal as a gift for a beer lover celebrating a birthday, anniversary, or special event.

How to Make A DIY Craft Beer Advent Calendar

This DIY craft beer advent calendar was so easy to put together and took about 30 minutes.

Here's how I did it:

Got an extra bottle of stout beer?  Try this Black Velvet cocktail recipe for the holidays too!

Be as creative as you want and take this DIY craft beer advent calendar to the next level!  The craft beer lover in your life will love you for it.

Don't forget to PIN for later! 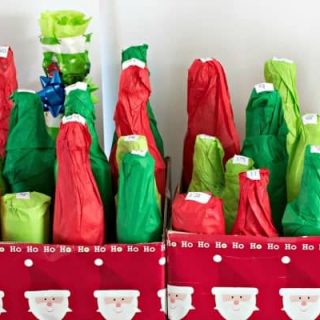 How to make a DIY Craft Beer Advent Calendar

Need a unique Christmas gift for the craft beer lovers in your life? Make them a craft beer advent calendar and give them a beer once a day for 25 days!
5 from 1 vote
Print Pin Rate
Course: Drinks
Cuisine: American
Prep Time: 30 minutes
Total Time: 30 minutes
Author: Karrie | Tasty Ever After