Home » Quick and Easy Recipes On Tasty Ever After

Have a Turchicken this holiday season!  This isn't your normal bird with a boneless chicken inside a boneless turkey and layered with a homemade cornbread sausage stuffing. 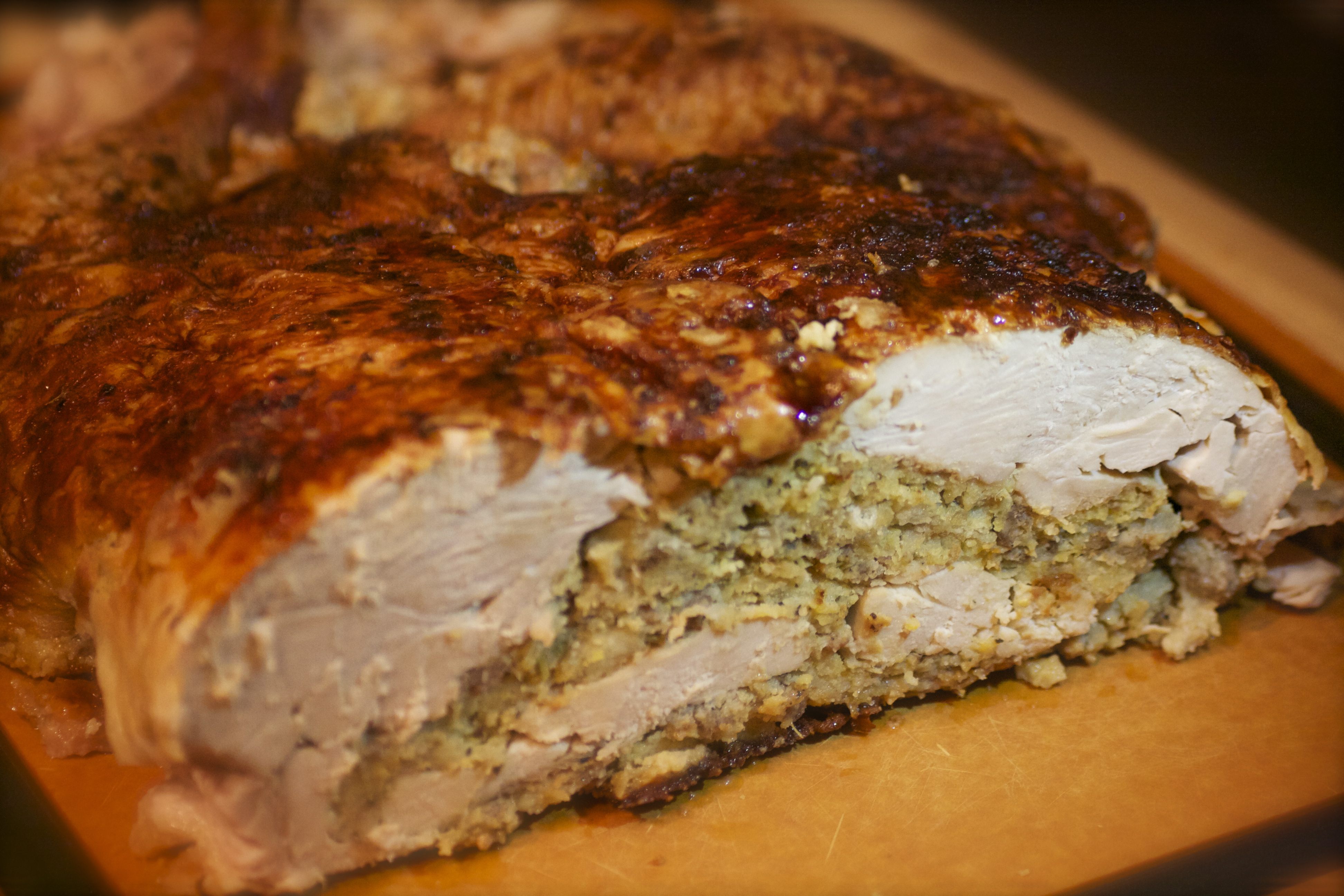 We made a turchicken with cornbread sausage stuffing for Thanksgiving.  J usually makes a turducken but we had to leave the duck out for some Family members who weren't duck lovers.

I have to admit, as much as I love duck, I liked the duckless version better.  I definitely like saving the duck to roast on it's own so I can have all the crispy skin.  After all, that's why we all love duck.  It's all about the skin.

Back to Thanksgiving, the turducken is our annual traditional holiday dinner and I was so looking forward to it this year.  Unfortunately, we were part of the huge power outage in New England on that morning, so we didn't have an actual real Thanksgiving dinner until Sunday night.  Good times!

Needless to say, it was a bit of a bummer but we will never forget this holiday year and it made us very thankful for each other.  No matter what our situation or where we are, we'll always have each other.  Awww.

Deboning a turkey or chicken is not that difficult, just a little time consuming.  It took J about an hour to debone both and he used kitchen shears as well as a knife.

Be sure to give yourself plenty of time and have patience.  Do it the day before if it's easier and less stressful.  It may seem daunting but it is totally worth it in the end.

Boneless chicken breasts or thighs can also be used if you don't want to spend the time deboning a whole chicken.  I took lots of great photos of J removing the bones but then found this excellent YouTube video showing step by step instructions so thought it would be a better visual.

What to do with all the leftover uncooked bones?  Roast them in the pan next to the turkey until they are a nice medium brown color (about 2 hours) then use them to make the best broth ever.  Just place the roasted bones in water with celery, onions, and carrots with some fresh herbs of your choice, then simmer for at least 4 hours until you have a rich, flavorful broth.  Strain it and use some to make a gravy for the turchicken and freeze the rest for later use.

Gracie supervising the deboning of the birds.  She took her job verrrrrrry seriously. 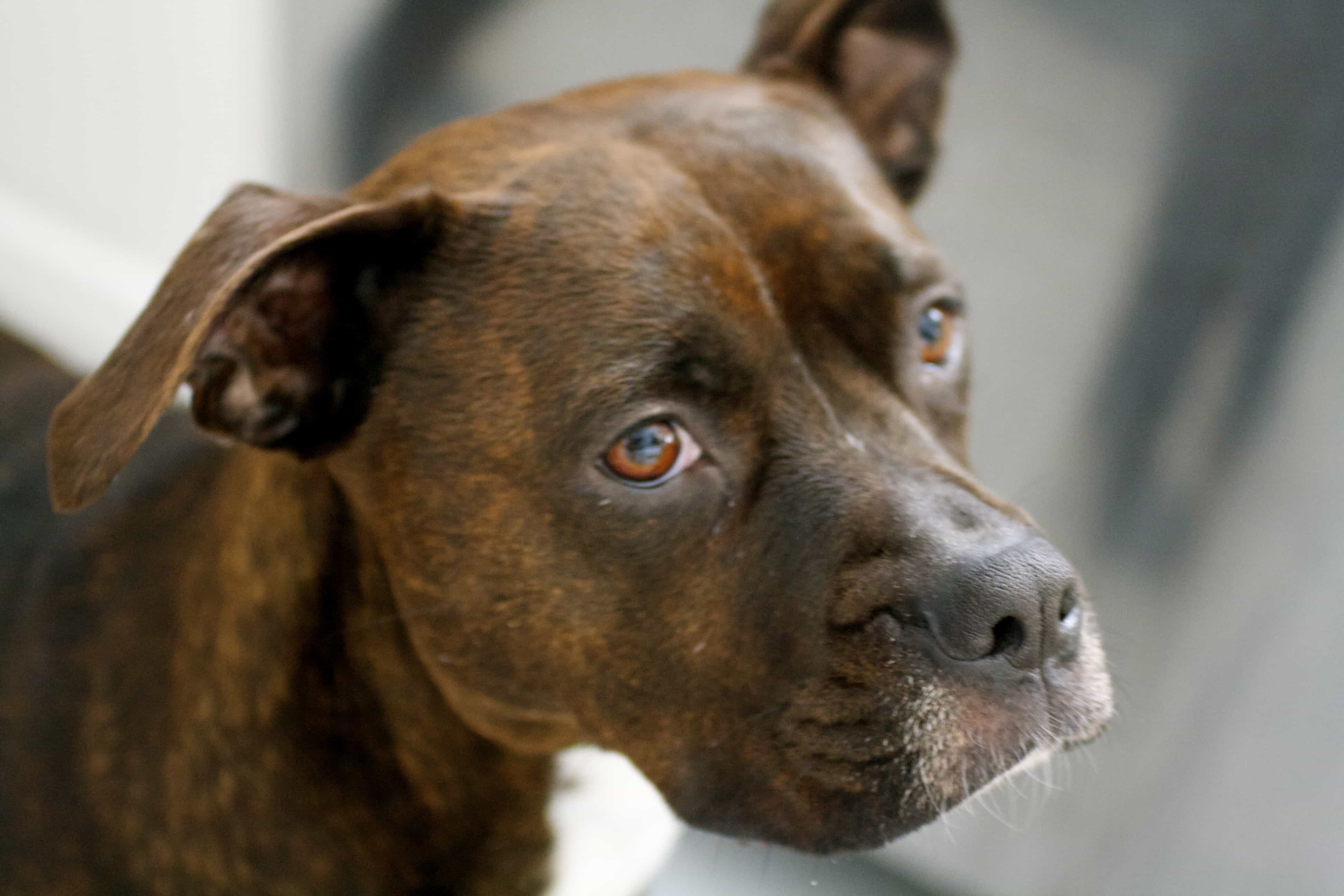 Another little tip is don't worry about perfectly trussing up the bird (using kitchen twine to hold the stuffing inside the birds).  For the first time, we didn't use a rack and our turchicken busted open in the pan.

The cornbread sausage stuffing leaked out of the chicken and baked on the bottom of the pan in all the juices.  It became all crispy and moist and was the most delicious thing ever!   I love tasty mistakes.

See the stuffing on the bottom middle of the turkey?  Yeah, crispy stuffing is my new love.  I'm going to make a full batch just to fry it up on it's own in a bunch of fat in a pan and eat it all with a fork. 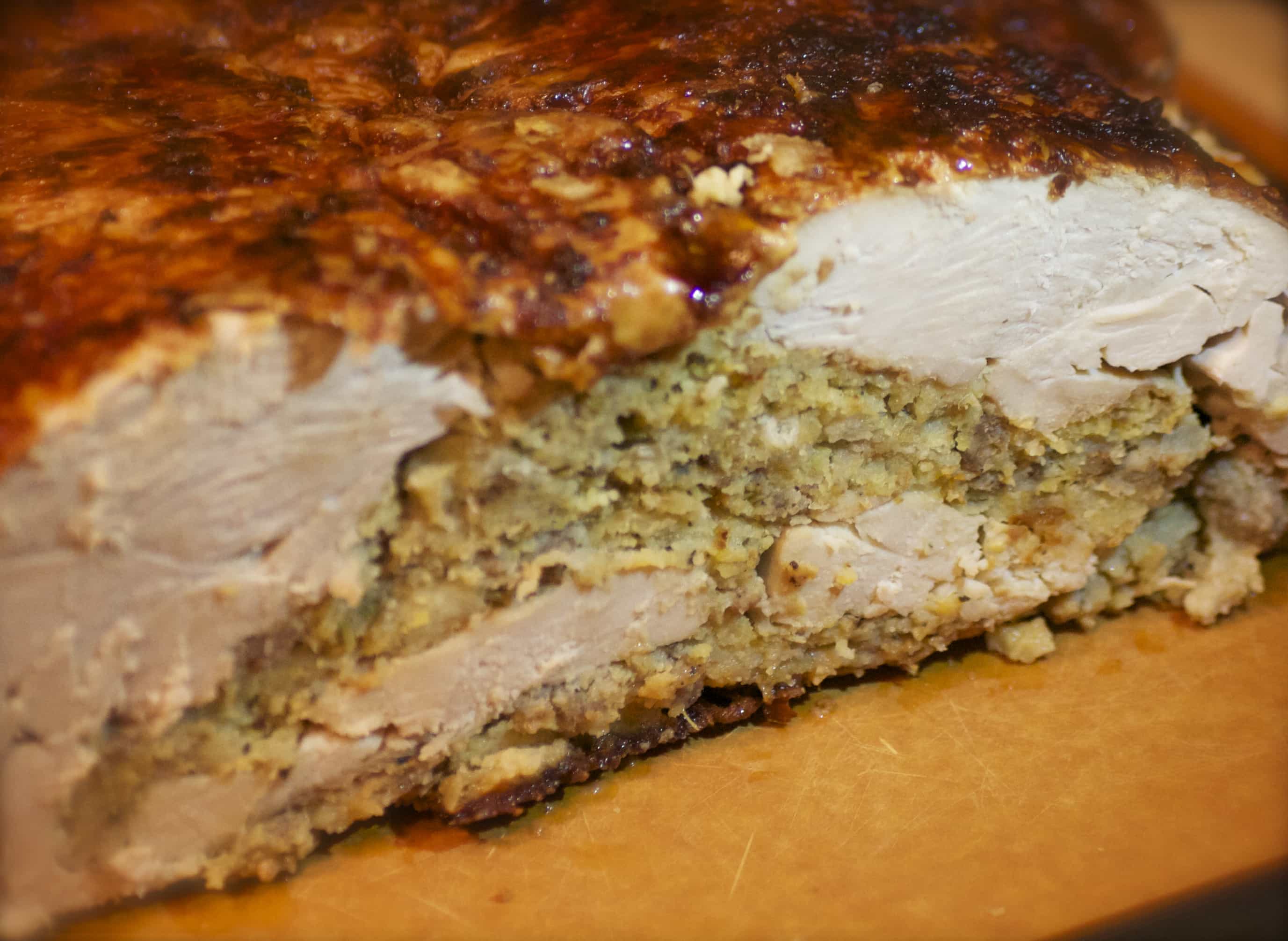 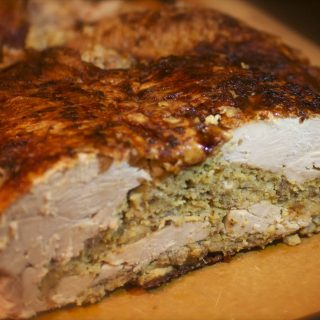 FOR THE CORNBREAD SAUSAGE STUFFING:

More recipes you may enjoy